QUESTION: “I would be interested in your answers to the following:

1. Why do diamonds not have a futures market?

2. What do you think would happen to the price of gold if there was no gold futures market?

3. Who do you think bought all the gold contracts that were recently sold?“

ANSWER: The supply of Diamonds has been a monopoly closely guarded. Because De Beers is outside the USA, attempts to break-up that monopoly have failed, see: De Beers Consolidated Mines, Ltd. v. United States – 325 U.S. 212 (1945). Consequently, there is insufficient competition to warrant a futures market when the supply is tightly controlled. Nevertheless, De Beers is not free to charge whatever it likes forcing the market to accept its demands. De Beers has been subject to supply and demand as well and has had to curtail supply to support the price. So a monopoly is by no means able to dictate price because sales will decline if the public rejects the product.

The second problem with diamonds is quality. “Investment Grade” diamonds have fluctuated greatly and have at times fallen in price by more than 50% during recessions. Because the stones are not easily ascertained regarding quality with the naked eye, they remain a volatile investment requiring certification.

What would gold be worth without a central market is highly debatable. Remove that market and you destroy the value. Tulips rose in Holland during the 1600’s because there were central trading branches and what was being traded were options. A similar problem emerged for the 1966 rally in the Dow. Mutual funds were listed on the exchange. I had listened to my father, bought Fidelity Trend, and watched it crash from $54 to $7. Why? Because listing the funds resulted in them being bid up far beyond what their net asset value was. Since then, mutual funds cannot trade in that manner. You certainly would not have had the 1980 peaks with no market.

Lastly, there is rarely a BUYER who buys the high and carries that to a loss all the way down. The buyers are typically short sellers and some attempts at bottom picking. It is the Spiral Panic. 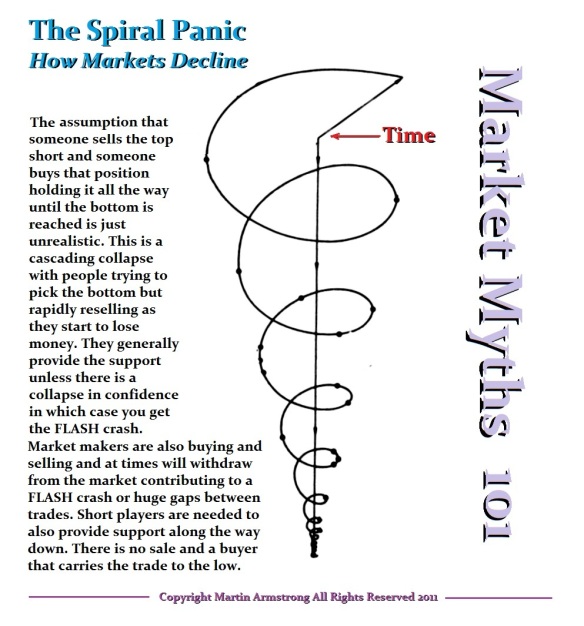