On Friday, U.S. District Judge Naomi Reice Buchwald in Manhattan ruled for the banks, gutting lawsuits about LIBOR manipulation. Judge Buchwald’s nickname is “Buckwild” and she is very much part of the New York crowd. So what part about the court in New York being the most corrupt do people fail to understand? It is the only court that claims it can change the words of witnesses in the transcripts to sanitize the record AFTER the fact, something anyone else would get 5 years in jail for (see UNITED STATES v. ZICHETTELLO @p97). No suit against ANY major NY bank will EVER proceed in that court – Southern District of New York. Every major suit ever filed in the SDNY since 1985 has been largely dismissed. Just look at all the suits dismissed even AFTER the investment banks plead guilty to the SEC for putting out fake research.

Here there were 16 banks that had faced claims totaling billions of dollars in the case, which had been considered the biggest legal threat in recent years. As far as investigations being pursued by regulators in the United States, Europe and Britain, those will always be non-events. ANY New York Law Firm that brings this type of suit we have to ask WHY when none ever succeed? Clients pay them millions up-front to do a job that never works?

Perhaps, these suits are brought in NYC knowing they will be dismissed and that is the way the banks remain UNTOUCHABLE no matter what they do. Perhaps the law firms are part of the protection for the banks. If they really wanted to win, they should have brought the lawsuits in London where LIBOR is set – why New York? This time the banks included Bank of America Corp, Citigroup Inc, Credit Suisse Group AG, Deutsche Bank AG, HSBC Holdings PLC, JPMorgan Chase & Co, Royal Bank of Canada, Royal Bank of Scotland and WestLB AG. Since NY dismisses the lawsuits, it is then impossible to bring them in the US again.

The banks were accused by a diverse body of private plaintiffs, ranging from bondholders to the city of Baltimore, of conspiring to manipulate the London Interbank Offered Rate (Libor), a key benchmark at the heart of more than US$550 trillion (S$682 trillion) in financial products. How can these banks pay fines, manipulate constantly, and always walk away? Something is just not right about this whole thing. NEVER sue the banks in New York. That is their home turf. The Facebook suits were consolidated and usurped from around the country and sent where – NYC. That is the court that handled M.F. Global. Come on. The definition of insanity is constantly doing the same thing over and over, while expecting a different result. Congress will not reform the banks, nor the Judiciary. So the whole thing is one giant waste of time. 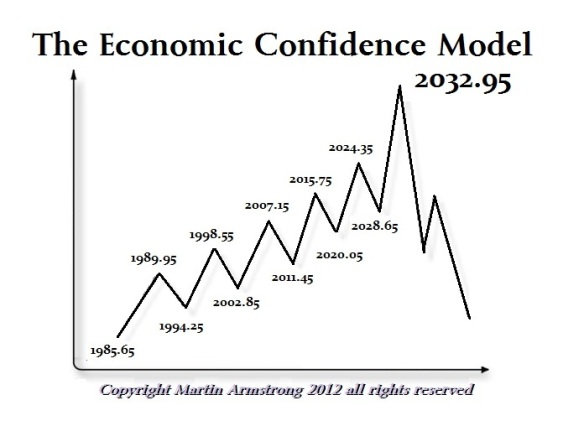 The opposition parties in Germany are warning each other not to join Merkel. The general hope is if nobody joins in a coalition with here, she will be unable to form a government. There is a rising sentiment in Germany that if Southern Europe can’t pay their bills – no bailouts. This was the reason for taking the bold step to screw Cyprus following the M.F. Global solution agreed upon at G20. With our computer models targeting panics for the Fall, this German election is going to be do or die for the Euro – and that ain’t looking good. The only thing to look forward to are new lows – the major high is in place. The long-term models show Europe will crumble with a 23-26 year collapse from the 2007 high = probably 2032.

When the Euro was forming, some used the Ecu as the guide, we created the Euro back in time to provide a clearer picture. When we did, the high was different and that projected a low for 2000/2001 instead of 2002, with a rally thereafter into 2007. With the advantage of time, we can see that recreating the Euro was the proper configuration. The low was 2000 with the subsequent rally with 2007 forming the highest close, 2005 was the reaction low for the final rally into the major high. The next major low would be 2020/2021, but an initial low seems likely in 2017.

Argentina defaulted again in 2010. They are in dispute in the New York Court of Appeal, the most corrupt Federal Court in the nation, with what they call “vulture funds”. At a press conference defending their fight in a US court against creditors demanding to be paid $1.3 billion immediately, they are at least acknowledging that with every bailout or deal, they only owed more.

Governments MUST stop borrowing. Jefferson, was correct. There can be no government borrowing. Look at what is happening because these people do not know how to run a government. They borrow to bribe the people “vote for me and you will get this”. This is not Halloween. Do the job and stop the stupid promises you never keep. These people are morons. If they would ever read a history book they might learn something.

Thomas Jefferson got it. He wrote in 1789: “The principle of spending money to be paid by posterity, under the name of funding, is but swindling futurity on a large scale.” John Adams said in 1799: “Banks have done more injury to the religion, morality, tranquility, prosperity, and even wealth of the nation than they can have done or ever will do good.” In 1820, Jefferson wrote: “It is incumbent on every generation to pay its own debts as it goes – a principle which, if acted on, would save one-half the wars of the world.” It was Karl Marx who praised a national debt in 1873. “The only part of the so-called national wealth that actually enters into the collectives possessions of modern peoples is their National Debt.”  So who do we follow? Politicians who borrow are Marxists. We should call them that!

As Adam Smith wrote in Wealth of Nations:

“Like an improvident spendthrift, whose pressing occasions will not allow him to wait for the regular payment of his revenue, the state is in the constant practice of borrowing of its own factors and agents and of repaying interest for the use of its own money.”

The fact that the German Finance Minister Wolfgang Schaeuble has come out stating that savings accounts within the Eurozone are “safe” claiming  that Cyprus was a “special case” and not a template for future rescues, proves that in fact the Eurozone deposits are ABSOLUTELY NOT SAFE! You never state a negative unless there is reason to do so. This is like Clinton – I did not have sexual relations with that girl announcement. In Japan, they assumed the Supreme Court ruled that oral sex is not really sex. I had to explain the Supreme Court made no such ruling.

The whole purpose of the Eurozone was a GUARANTEE that there would NEVER be any default. There was a default so just admit Europe had sexual relations with Cyprus and didn’t even leave a €1 tip. They selected Cyprus because (1) there were $4 billion in Russian deposits, and (2) it was attracting way too much money away from the main European economies that they were hunting down. Cyprus proved the G20 plan to confiscate deposits to pay off debt is alive and well. At least when Florence and Venice did forced loans compelling people to buy their bonds, they gave them something, then defaulted. Europe screwed Cyprus and gave nothing. Head to the stock market & real estate. This strategy was NOT to “stimulate” anything as the “spin doctors” are trying to claim. This is the next step in the Sovereign Debt Crisis before the wholesale defaults and the swap of currencies that is on the horizon. It was discussed at G20 levels because the USA had to write a $700 billion check to the NY bankers and they know they cannot do that again. So, the next time bankers lose your money trading their accounts, it will be the M.F. Global solution/Cyprus.

Even Adolf Hitler respected the sovereignty of Switzerland when he passed laws it was illegal for a German to have an account outside of Germany. Obama threatens to confiscate anyone who fails to report what Americans are doing and criminally prosecuted a Swiss bank for helping Americans. The Pope helped Jews escape Germany. Obama would arrest him today as a terrorist or conspiracy to money launder. The same is true of German and French politicians. Switzerland lost the ability to enforce its own laws and they treated the Vatican the same as Iran until they agreed to inform to whom every wire came from and was going to. Today, the world leaders make Hitler look like a respectful leader for they are far more ruthless, respect nobody but themselves, and diabolically untrustworthy. They will not respect the sovereignty of any nation when it comes to money. And Cyprus politicians showed whose side they are on – the political side AFRAID of German retaliation!!!!