The numbers for Japan in December would imply on the surface that capital inflows took place rather than outflows yet the yen declined. There are serious problems with the way  governments track capital/trade flows. They do not actually monitor anything but cash movement. This is a throw back to the fixed exchange era when if money was constant, then just follow the money and that implies you bought or sold more goods. This problem is seriously flawed for it does not accurately monitor real asset movement and distorts capital flows as officially reported. 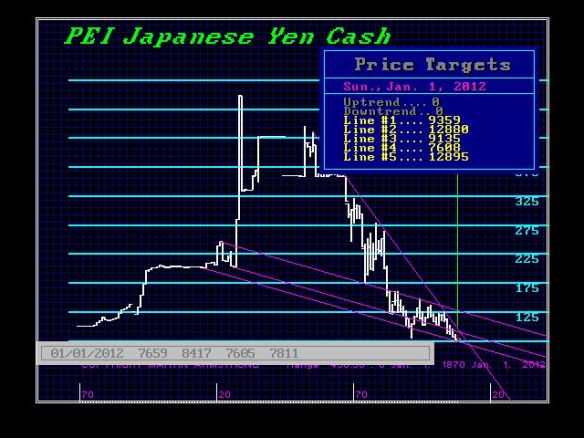 In our data base, we included the real markets. There was a free market (black market) during Bretton Woods that traded currencies in Hong Kong. Here is a chart from the birth of the yen in 1870 to date. There is the major spike high in the dollar for the Sovereign Debt Crisis of 1931 in 1932 because Japan was one of the last to abandon the gold standard in December 1931. The spikes just next to the window showing the technical projections are the Korean War even though the rate was “officially” fixed. This is the Hong Kong data we collected. The technical projected support for 2012 constructed from the highs of World War I in the dollar to the low first made in early 1971 was 7608 while the actual print was 7605. Now let us look at the facts.

This flaw in capital flows was exposed by the Korean War, The merchandise trade deficit deteriorated from $249 million deficit in 1951 to $997 million by 1953. The Japanese balance of trade with the British Commonwealth moved from a $231 million surplus to a $233 million deficit. This forced Japan to buy Sterling to ease trade friction in the amount of $124 million at the time. The British responded by imposing import restrictions against Japanese products. Were Japanese consumers going nuts all of a sudden?

Japan benefited from the Korean War (June 25th, 1950 – July 27th, 1953) as it now supplied US military with goods locally that were not reflected as exports since delivery was taken domestically within Japan. There was a capital inflow of US dollars caused by the war that a large part of the increase in imports was supported by these invisible receipts. This contributed greatly to the confusion concerning trade at that time. However, Japan was indeed recovering and with it there was an expansion of domestic consumer demand within Japan as well with the improvement in the local economy also influenced by the Korean War that confused everyone. The official fixed exchange rate for the dollar yen was ¥360 yet on the free black market trading in Hong Kong the yen moved to ¥450. This huge disparity between the official rate and the free market rate (that always existed under Bretton Woods anyway), was being driven by this confusion with what we call “invisible receipts” where the huge merchandise inflow to Japan was going to the US Military bypassing the official balance of payment statistics. Japan did not account for US “use” of domestic goods exported to Korea.

This confusing trend in the balance of payments added pressure to restrictive Japanese exchange controls, which was emerging during the 1950’s. In February 1953, Japan suspended temporarily the requirement for an import application covering merchandise given the crisis in the balance of payments of 1952-1953. This was the background against which Japan was forced to liberalize post-1956 going into the early 1960’s. It was only at this time that we see the black market prices fall in line with the official rate of ¥360 yen to the dollar.

If foreign assets are bought or sold domestically, this will impact the currency value. The Balance of Payments would reflect an outflow only when the “cash” leaves the country to purchase assets overseas. Purchasing those foreign assets domestically impacts the currency but bypasses the official statistics that measured cash rather than asset movement. This is why American Express, for example, will no longer issue a card to an American issued in a foreign land unless the American actually lives there. Otherwise, they would have to report cash flow even if you used the card domestically and no goods traveled between nations.

Welcome to the real world. Like everything else, governments are just totally confused about everything. They still pretend they can borrow with no intent of paying anything back as long as they keep the borrowing at a low level of GDP and say it does not matter because we are borrowing from ourselves. The cash outflow in interest is reported in the CURRENT ACCOUNT and that confuses people who then think American consumers are buying stuff when NO GOODS are arriving.

I have been explaining these bizarre flaws in the balance of payments for decades. I am getting tired of saying the same thing over and over again. The British pound fell in 1985 to $1.03 BECAUSE Volcker raised interest rates to insane levels (17% discount rate) so the “trade deficit” went to record highs and then they formed G5 at the Plaza Accord to force the dollar down to reduce the trade deficit to create jobs! Dah? The interest paid out for foreign investors goes through the CURRENT ACCOUNT creating the appearance of a “trade deficit” and their purchases of US debt goes into the CAPITAL ACCOUNT. 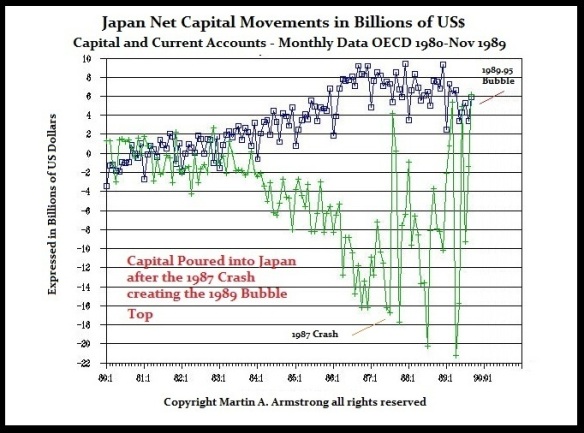 These morons created G5, increased volatility, and gave birth to the 1987 Crash. Then they want research only in a crisis. They managed to send capital fleeing back to Japan manifesting into their 1989 Bubble, and presto – we get a 23 year Depression in Japan because these morons do not understand their own statistics. I wrote to President Reagan warning not to do this stupid shit. When will we ever get people with REAL experience instead of lawyers in Washington? Rubin was starting the same shit. I had to write to him before he stopped and it was Geithner who replied. Do we have to create World War III to start over again?

This is the intent upon creating a new International Think Tank. Someone has to carry the standard into battle. It shouldn’t have to be this hard to explain simple accounting anomalies that these morons keep messing up the entire world over fighting their own shadows in an imaginary world that does not exist.