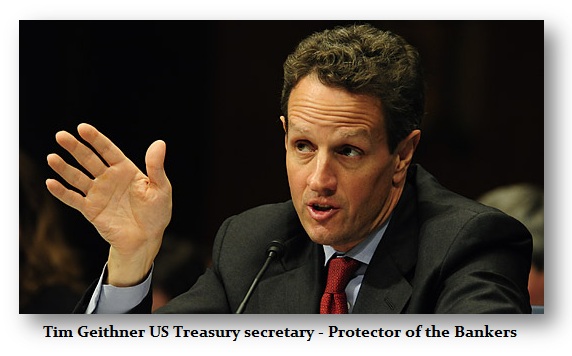 Tim Geithner has resigned as US Treasury secretary. He was the man who protected the bankers no matter what they did. The “Geithner Doctrine” applied this theory of “Too Big To Fail” to corrupt bankers that manipulate everything they can for quick profits. They constantly blow up for they view it as they have done a reverse takeover of government. The bullshit is – government will go bust without them. Who will sell their debt? The debt is what creates such political corruption that it does not matter if we are talking about Republicans or Democrats – they both have their hands out with the bankers.

The debt has also rendered the USA with erectile dysfunction. Why do you think both China and Russia are pushing Japan around? They both know the USA could NEVER go to war against them because they rely on their political adversaries to fund the bonds. What do you do now? Excuse Mr. China, here is a few trillion in bonds we would like you to buy so we can wage war against you? Come on. Japan is on its own. The USA has lost all power because of the debt. It can beat its chest all it wants, but it has erectile dysfunction politically.

Geithner and his band of thieves has totally screwed the USA and the world economy. There is NO bank that is “Too Big to Fail.” There is a whole level of banks ready to step up to the plate. Goldman Sachs is not even a bank in real terms. They do not take deposits from little old ladies. They are traders using other peoples’ money – that’s it. We do not need the debt and almost 70% is going to interest anyway. It is the total destruction of everything everyone believed in their whole lives.  Geithner institutionalized the corruption. Why should banks do anything but risk it all all the time when they know if they win, they keep everything and when they lose, the Taxpayer eats their losses. Goldman even had the balls to get their new offices under the the 911 Liberty Zone so they didn’t have to pay taxes. Talk about using the dead bodies for profit.

As long as we continue to regard these bankers as above the law, we are screwed as a nation. Sources on Capital Hill have stated bluntly that the NY bankers will NEVER be prosecuted for anything because they pay out so much, the politicians are licking their lips and hope to get a lump sum upon retirement.

This “Geithner Doctrine” is destroying the entire world economy because it prevents any hope of reform whatsoever. Every time the bankers blow up the world ever since Solomon Brothers got caught manipulating the US Treasury Bond Auctions. In 1991, US Treasury learned that Salomon Brothers had been submitting false bids in an attempt to purchase more Treasury bonds than permitted by one buyer during the period between December 1990 and May 1991. This is the same MO in the latest LIBOR scandal – false bids.

Then the people from Solomon Brothers set up Long-Term Capital Management that blew up 4 years after that was formed in 1998 forcing the Fed to bailout a hedge fund. How? They were buying Russian bonds at high yields because Edmond Safra and others thought they had the latest guaranteed trade by the IMF guaranteeing whatever Russia borrowed. OOPS. That didn’t quite work out.

No criminal charges were filed and that set the precedent for what was to come. Then there was the fraudulent research reports to sell investors IPOs for the 2000 Bubble. Another guaranteed trade gone sour.

They have routinely manipulated commodities. Bribes were paid to Russian officials to “recall” all their platinum to take delivery. Platinum soared and then just as auto manufacturers had to buy at the top, Russia discovered they had more. Guess who was short!

There is just NEVER going to be any cleaning up of anything. The bankers OWN government and they will continue to manipulate markets, risk it all in proprietary trading, and when they need money, they argue they are TOO BIG TO FAIL which is the biggest bunch of bullshit anyone ever sold to the public.

The latest scandal of manipulating LIBOR rates demonstrates they will ALWAYS resort to manipulation even after blowing up the world economy with the mortgage backed nonsense. Remember Orange County? Merrill Lynch was trying to sell that scheme to trust funds of universities. Dick Fox was chairman of Temple University when Merrill was pitching that scheme. You bought 30 year bonds and sold 10 years against them and they were leveraging the money at least 10 to one. You captured the slight difference between the 30 and 10 and when reflected back to the actual amount of money invested, you doubled your yield. Dick told them to run it by me. They flew in from Chicago and I told them if rates made just a 1/4 point increase, they lost money. They went back and reworked the numbers flying out a second time to show me it would be a break-even. I laughed, told them this was the trust fund of the University and I would have to recommend it be rejected to the board. They told the board I was “too old” and didn’t know the “new way” to make money. They blew up Orange County in 1994 on that scheme and were sued for $2 billion. Temple University would have had to close their doors.

How many times do these firms have to plead guilty to blowing up the world and nothing ever happens? As long as they can design flawed products and never have to account for what they do, why should this EVER stop?

The preservation of the largest banks, no matter what they do, has illustrated to the whole world how corrupt the American Justice system really is. There is a two-tiered system of justice where if you compete against the NY bankers, you are charged with anything and destroyed – ie Drexel Burnham & Refco. If you are one of the New York favorite sons, you can blow up the world and nothing will EVER happen – Goldman, City Bank, and even MF Global. This is why we have to crash and burn. There is no hope of reforming anything until Congress stops lining its pockets from the NY Bankers. And for those who quote me – please do NOT use the term Wall Street. That is misapplied and people then assume it is stock brokers. This is limited to the bankers/investment bankers. Not the average stock broker sitting on a desk in New York. They have NOTHING to do with this nonsense. The bankers love the term Wall Street, because they are not there.